Because everything's better with vodka and olives.

So, I’m planning a trip “home” (use that term loosely) from Colorado to Michigan later this week. I just realized I bought a Rand McNally Altas because of my distrust of Siri (and, I need work arounds that aren’t spur of the moment – I’m traveling with a dog here, we need a hotel). I’m thinking I may post up a really intense blog about it – or I got you all excited for nothing and I’ll bail.

I kind of want to do this.

We’ll see. This could be fun. 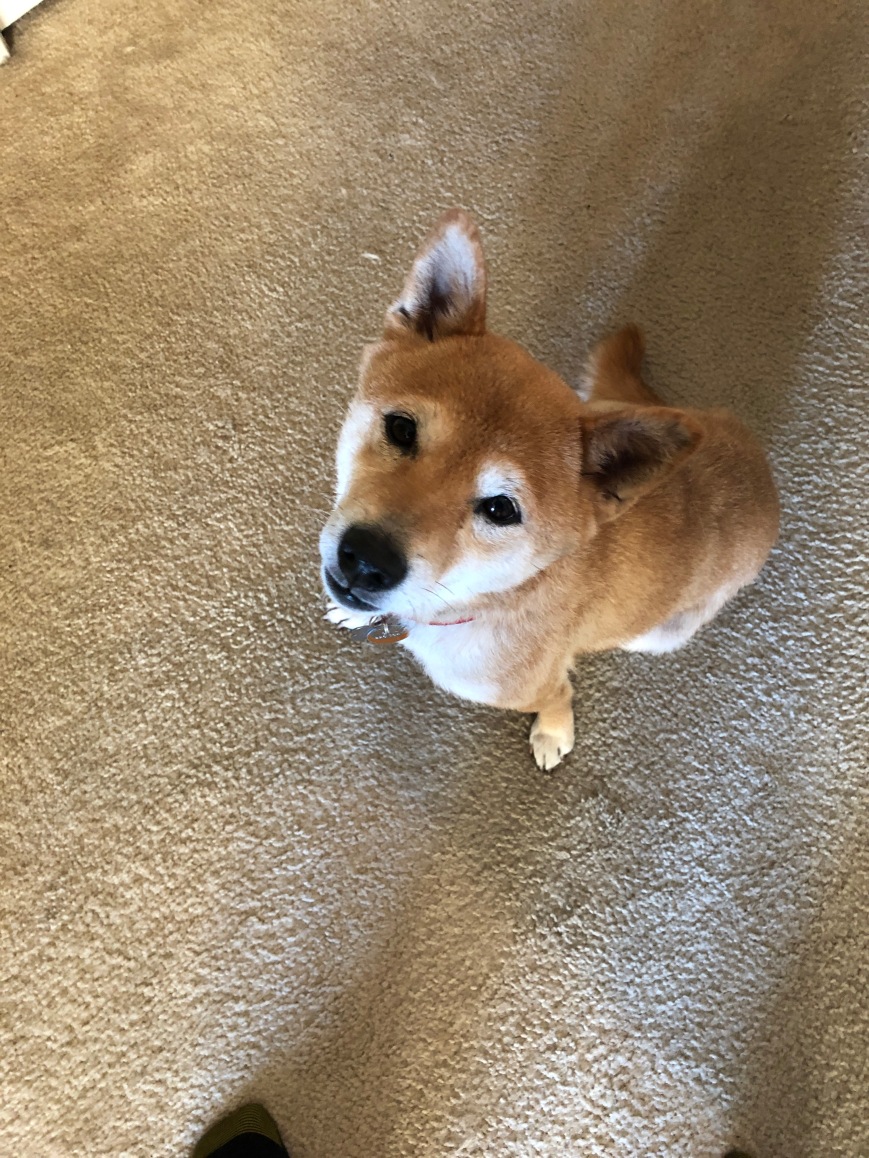 And then this little furry asshat with no real history came along and I. Was. In. Love.

She’s a jerk in the most adorable way. She likes to bark, she hates small dogs and children, she thinks our apartment is her domain and she has to protect it. Bark, bark, bark. She apparently feels like the lack of quiet decorum in our hallways is her job to police.

I’m teaching her; she’s learning. She’s super smart and she’s been easy to train so far, but the dealing with other dogs thing is going to take a lot of time. We got this. I don’t expect her to be perfect today but she’s been learning way faster than I thought she would. That’s all her; I think I suck as a dog trainer.

She’s learning that people in the hall are not people we have to worry about, she doesn’t need to kill all the dogs in the building, and she LOVES walking around the lagoon every morning. She’s a girl who loves her walks.

It’s a little late, but here’s what I’ve read so far. I’ve pledged to read 100 books in 2018 on Goodreads and I’m ahead of schedule so far. Here’s my list. Feel free to give me recommendations in the comments.

I’m going to link here to a perfectly logical, well thought out argument for why gun control is a waste of time from a person who should know (and his books are pretty good too, so….read them if you are of a mind).

And, I’m going to get roasted over the coals by some feel good happy shiny people who think only the government should have guns. If you don’t understand why I (and a LOT of other people) have a problem with this, then I really can’t explain it to you.

So, here’s your choice:  agree to disagree, or go away. I’m not changing, you’re not changing. If this is a deal breaker for you, you people who are my Facebook friends, then feel free to unfriend me and move on. I bear you no ill will and I’m not getting into this. I’m willing to entertain intelligent discourse but I’m fairly certain I’m not going to get much in the way of that, so for those of you who know me IRL…choose your battles.

Well, I think I’ve discovered the root cause of my unrest and general anxiety.

I think it’s time I take a break, just check it maybe a couple times a week. I can’t even with this shit.

I need to focus on me right now. I need to get healthy, get happy, get involved in my community. And, ironically, social media is not really helping me with this.

I grew up in an age with NO social media so I’m going back to it. It was a kinder, happier time. I miss that, in a way. (And yes, I get I am saying this in a blogpost).

I will check my social media twice a week, for one hour. That is my commitment to myself. More than one hour and it is SO easy to get sucked in ALL DAY. No. NO, I do NOT want to be that person.

So, I’m taking a break. I’ll still be in touch, minimally. If you need me you know where to find me. If you don’t, message me. I’ll look for a few days so get your requests in.

I’m doing this for my mental health, and I recommend you try it too.

Trunk or treat. Are you kidding me? There is NOT a child molester/crazy person who will poison your kid around every corner. That whole thing got started by some dude who purposely poisoned his kid for the insurance money. Don’t believe me? READ THIS: I killed my kid for money.

STOP being assholes, people. Halloween is supposed to be scary, and it’s fun as hell. YOU ARE RUINING IT BY BEING AFRAID OF A PROBLEM THAT DOES NOT ACTUALLY EXIST. There is not a pedophile or murderer around every corner. Your kid is more likely to be abused by SOMEONE YOU KNOW. Maybe you should start looking there.

In the meantime, stop fucking ruining Halloween, you neurotic assholes.

Women are born looking over their shoulders. Know why? YOU. Your gender has some really bad actors and I think it’s time the good ones start telling the bad ones to stop their shit and go the fuck away.

We get called a “fat bitch” if some jackhole on OKCupid hits us up for a hookup and we don’t comply. (I will never understand this one; you wanted to fuck me RIGHT UP until I told you no. NOW I’m a fat bitch? Sweetheart, I didn’t change in the ten minutes it took you to figure out I wouldn’t fuck you).

We were raised from the time we could remember to watch out for men, don’t get in situations where you can get in trouble, always watch your back. Not ONE man I’ve ever met has experienced or understands this. WE HAVE BEEN TOLD TO BE WARY OF YOU BECAUSE WE NEED TO BE. ALL THE GODDAMN TIME.

You “good” men need to start leaning on the “bad” men. You want to know why I won’t tell you where I live, and why I meet you in a public place? You’ve got a lot of bad actors in your gender. Why I had a setup with my girlfriend to call me in an hour as a “check in/date ender?” bad actors. Why I don’t reply to your “blank” profile and you’re oh-so-witty “how r u” messaging (okay, really, that’s because you’re illiterate and can’t bother to read a profile and compose a complete sentence, but still) because I’m not stupid and all you want is a hookup.

I’ve given up online dating for all of these reasons, and frankly, I’m done. If I meet you IRL and we click, great. But online dating today, and a lot of men in general, are complete mysogynistic assholes, and I’m not having it.

And in real life, you idiots might want to consider that a) some of us have martial arts training and b) some of us are packing iron.

Also, grow up. Would your mother approve of your bullshit?

Well, I’ve lost the first major icon of my teenage years. Prince died yesterday. I’m still trying to wrap my mind around this one.

When Purple Rain came out, my sister, a year and a half younger than me, REALLY wanted to see it. Our parents were willing to let us have the car to go to the theater. I wasn’t really interested, but in a rare show of older sibling nicety, I said, “Okay, we’ll go see it.”

And we did. I was blown away. BLOWN AWAY. Little did my sister know she had catapulted me into a love affair with an artist that would overshadow the last of my teens and my early twenties.

Prince had a lot to say, and in my impressionable 18-20’s  a lot of it really resonated with me. I began looking up his older stuff as well as anticipating new stuff – I loved him. I had Prince posters all over my room, which irritated my fairly racist father, but he never actually MADE me take them down, so I think that was a big step for him.

I got to see Prince in Detroit when he did his Purple Rain tour, and he was phenomenal. I’m so thankful I did that.

I lost touch with Prince’s music in my mid to late twenties, but I still loved his older stuff. And now that I’ve heard of his passing I’m feeling oddly emotional, and I suspect that’s because a piece of my young adulthood has died with him.

I haven’t walked to my local liquor store in some time, but I encountered the Three Amigos as I passed THE CITY BUILDING. Like, let that sink in. They were sitting outside the city building panning for change.

I had the dog; she LOVES liquor store runs, as THEY GIVE OUT DOG TREATS. So. I’m fairly certain if I don’t walk her there for the next three years, she’ll still know. Dogs, amirite? *eyeroll*

These gentlemen commented on my dog, just to comment on my dog. I brought her over to meet them, as they seemed nice and they were really interested in her. One of them even knew her breed. Now, I know 90% of the population would have just moved on, and in a bigger city I might have, but here we literally have like 15 homeless people you ever see on a daily basis if you walk around downtown, so you get to know the characters. Luckily so far all the ones down here are completely harmless and, contrary to popular belief, really fucking smart. Like scary smart. And, contrary to popular belief, super nice. Like, nice nice. I can’t even make this up.

So, they meet the dog, and of course the worst one off in the group (I’ve encountered him before; he’s really into his alcoholism; I feel sorry for him but, you know, it is what it is) asks for money. The other two, to my surprise, shame him.

I only have my cc and my ID, but, since they’re nice and hey, the two “better off” ones are looking out for “worse off dude” I’m all, “Hey, I have to come back this way, I’ll hook you up”.

Please, feel free to flame me for giving alcoholics alcohol. I grew up with a high-functioning alcoholic as a father, please tell me what part of this I don’t get. Don’t cry when I hand your ass to you.

They drink. They live on the streets. Can I give them food? Oh, I could IF I had a restaurant nearby I didn’t have to drive to. I was on foot, with the dog. Do they drink? OF COURSE THEY DO. And really, they are begging money for booze. Now I feel like since they have the booze I gave them they might actually go eat. So.

I’m not sure it’s actually charity, but come on. They’re happy, I’m happy, it’s not like one of them is going to clean up and run for congress (although I’d probably vote for him). It’s fucking human decency. I spent $9 and they’ll be happy for 3-4 hours. I’m okay with that.

THE COMPLETE WORKS OF OSCAR WILDE – Introduced by Merlin Holland

DEAD TO HER – Sarah Pinborough